In 1923 Maxwell Maltz graduated with a doctorate in medicine from Columbia University.  He spent 30+ years helping people superficially overcome their deepest insecurities with plastic surgery.

He helped people change the shape of their nose.  Tighten the wrinkles in their forehead.  Trim the love handles around their belly.

You know, the important things in life.

Nobody expected Maxwell to write one of the most influential books in history on personal development… but he did.  To this day, most people have still never heard of this book even though it explains the root cause of all personal achievement (or lack thereof) in life.

The Tale Of Two Patients:  Why Does Plastic Surgery Change The Lives Of Some People But Not Others?

Maxwell began to notice a very clear pattern among his patients.  After surgery, people would fall into one of two groups.

The first group of people would get plastic surgery and their entire life would change.   They would go home and change careers, shift relationships, create new friend circles, make more money or a variety of other drastic changes.

Often these shifts would happen rapidly, within a matter of months.

They physically appeared differently, but they didn’t break any of their old habits and life continued on the same way for them.

After seeing this trend happen over and over for years, Maxwell started wondering “Why can two groups of people get the same surgery but one group completely shifts their life while the second group does nothing with it?”

His quest to solve that question led him to publishing a book in 1960 titled, “Psychocybernetics” which was the birth of the personal development era.

This book defines the root cause of all achievement and explains why some people make massive results in their lives while others stay stagnant.

To understand the root of what Maxwell Maltz explains, you first have to understand where ‘results’ come from.

Ultimately what we’re all after is results.  We want more money.  A loving relationship.  A hot body.  More fun.  More relaxation.  We always want something that we don’t currently have.

This engine of desire keeps us as a human race moving forward.  Without this, there’d be no need for ‘personal growth’ or ‘self help.’

Can you imagine if we were all enlightened humans with no desire driving us forward?  We’d all just sit in nature and meditate all day long.  No striving.  No conflict.  No challenge.  It’d be like living in a black and white world like the book The Giver.

To understand the science of achievement, we must start with the end goal and reverse engineer how we get there.   If you created a beautiful looking chart, it’d look something like this:

Let’s break it down by starting with the end goal:  Results.

Results –  The desire for an outcome you don’t currently have

The first question to start with is, “What leads to results?”

The answer is simple.  The actions you take lead to the results you achieve.  You’ve been taught this since you were a kid.  Take action.  Get results.  Repeat.

Actions –  The actions you take lead to the results you achieve.

Chasing the rabbit deeper, “What leads to your actions?”

Your thoughts lead to the actions you take.  “Duh, you idiot.  Everyone knows that.”   We’re still in personal development 101, so stay with me here.

You know this.  And you’ve probably experienced it.

Thoughts – The thoughts you think lead to the actions you take.

This relationship between Results, Actions and Thoughts are the basics of personal development.   Countless books, movies, articles have been written or recorded about them.

The problem is, life is way more complex than simply changing your thoughts.

Each layer deeper into the psyche we go, the more complex and harder things are to shift.   (And consequently, the more leverage you have when things actually shift.)

So… “what changes your thoughts?”

Beliefs – The beliefs you’ve ingrained lead to the thoughts you think.

Your beliefs are your ingrained ideas about how the world works.  Thoughts you’ve thought over and over until you hardwired a neural pathway in your brain.

Imagine walking down a path in the woods that has beaten down by animals walking over it over and over.  The path is clear and it’s easy to walk on.

That’s what happens when you think a thought over and over.  A groove forms in your brain and you have the seed of a belief… what you believe about how ‘reality’ works.

Eventually that thought becomes a belief that unconsciously operates whether you’re aware of it or not.

Some beliefs are empowering.  Other beliefs are limiting.  In this phase, we seek to reverse the beliefs that limit us and replace them with ones that empower us.

Byron Katie refers to this in her book ‘The Work’ about reversing limiting beliefs that have held you back.  This is the depth of where most personal development peaks.

But there’s another layer that Maxwell proposes…

What leads to your beliefs?   As Maxwell describes it, your “self image.”

Your self image sets the boundaries of individual accomplishment.  The self image is the key to human behavior.  Change the image and you change the personality and the behavior.  – Maxwell Maltz

Self Image – Your self image is the root of all achievement in life.

Your self image is all the beliefs, ideas, and thoughts around who you believe you are meant to be in the world.

If you have a ‘self image’ of someone who’s healthy and fit, you’ll act in alignment with that image.

You cannot escape your self image.

This is the core of who you are.  And you will always act in alignment with what you belief about yourself.  Period.

70% of lottery winners go broke. This is the reason why.  Their self image doesn’t know how to handle it.  So they blow it all.  And they end up right back where they were at.

Back to the story about Maxwell…

After watching hundreds of patients get a cosmetic shift in their life, Maxwell realized the ones who made significant changes  in their lives had a shift in self image.  The surgery wasn’t the catalyst.  It was actually the shift in how they viewed themselves that made the difference.

The unique thing with Self Image is, if you create a tiny change in your self image, you’ll create a ripple effect throughout your entire life with the results you’re capable of achieving.

Our self image, strongly held, essentially determines what we become. – Maxwell Maltz

Why Some People Fail At Reaching Their Goals Over And Over

Maybe this is why famous philosophers like Aristotle use the question “Who am I?” as the root of all spiritual growth.

So the question we’re left with is, “How do I create a shift in self image?”

To illustrate this, we’re going to use some ‘not-so-beautiful’ hand drawn cartoons by yours truly. 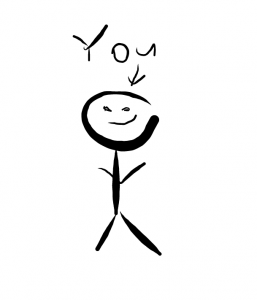 On your left is your “self image.”  On your right are your hopes and dreams.

You can use willpower to force your way towards a goal.

Maybe you’ve already done this.  You’ve pushed and set goals and had accountability.  And dug your feet in and tried and tried to reach your goal.  And you get really, really close to it…

But as you get closer, the rubber band tying you to your self image gets tighter.

You may even achieve your goal for a period of time.  But eventually, the resistance becomes too great.  And you snap back. 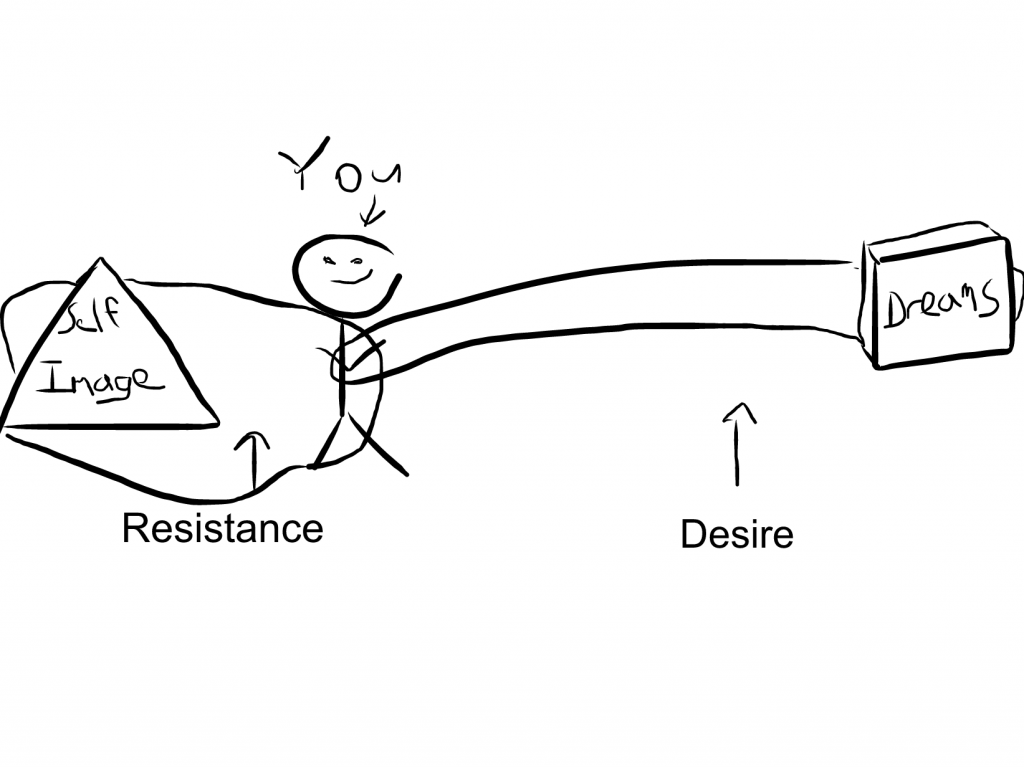 This is what happens when people “relapse.”  They lose a bunch a weight and then put it all back on.  They make a bunch of money and then lose it.  They snap all the way back to the root self image they hold of themselves.

But they don’t stay there.  Because soon, the desire band starts tightening again.

Eventually, you end up stuck in the middle.  Pissed off and angry.

The tragedy is that soon, you start questioning yourself and your capabilities.

And worst of all, at some point, you start to lose hope.  And you think, “Maybe it’s just not supposed to happen to me.   Maybe I don’t actually have any control over it.”

That is when you become an angry, bitter old “adult” who walks around telling the next generation of naive, ambitious youth that, “The world just doesn’t work that way, kid.  You can’t have everything you want.”

Fortunately, there’s a way out of it.  But it’s not through creating vision boards, writing affirmations or doing any other positive thinking…

The way out of it is to construct a new self image.  And align your desire with the new image you hold.

In this situation, you snap the rubber band holding you back by crafting a new, alternate identity for who you want to be in the world.

This identity becomes the desire and what drives you.  You align your beliefs, thoughts and actions with this new sense of identity.  And that begins integrating into your life.

Why My First Business Failed Horrible After Unconsciously Sabotaging Myself

When I was 23 I built a website in six weeks that was generating ~$6,000/month in revenue.  It was phenomenal.  I remember launch day, I made $4K.  That was almost what I was making in a month in corporate America.  It was mind blowing to me that I could make that in a day.

As the weeks went on, I didn’t realize it, but unconsciously, I was starting to freak out.

If I really hit my goal, that meant I’d have to actually quit my job.  I wasn’t ready internally.  So I started sabotaging myself unconsciously.

Six months later, that site came crashing down and I started all over from scratch… again.

Why?  My self image wasn’t in alignment with my results.  So I reverted back to my old self image.

The truth is, it was SAFER for the business to crash than for me to actually have to consider quitting my job.  I wasn’t ready.  So I sabotaged myself to prove it.

You Cannot Escape Your Self Image

You cannot escape your self image.  But you can use it to your advantage.

Everything you’ll achieve (or don’t achieve) in this lifetime is a reflection of your self image.

Launch Your Physician Job Search with the Right Recruiter July 20, 2021