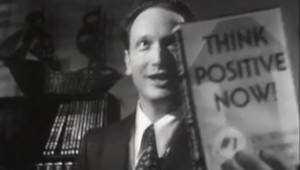 “Think Positive Now”: the image is from a wry black comedy The Debt (1993) involving a couple’s confrontation with a door-to-door salesman pushing a book on the topic.

One of the main categories of material on the TalentDevelop series of sites is books and programs that others – and myself – think can help us to better realize our talents and become more authentic and successful.

But, like the movie, there are many forms of hype and misrepresentation in the public marketplace of personal development.

“Well, there is power to positive thinking if you internalize it. I think there’s a lot of misunderstanding on it. People they think if they just think positive the world’s going to change.”

And that is one of the seductive distortions in how The Secret and other programs at times get promoted: that if we simply “think right” our lives will start working and we’ll win the lottery or the dream spouse.

But, Proctor added, “The world is not going to change. What they’re going to do is heighten their frustration because they’re looking for change and it doesn’t happen… it’s the subconscious mind that’s controlling the vibration we’re in, controlling the results we’re getting.”

That may be true – I’m still fairly new at exploring this area of “attraction” and “manifestation” – but many of the pronouncements by various kinds of leaders can arouse anxiety that we’re not thinking or believing “well enough,” consciously or unconsciously. That sort of anxiety can’t be a positive force in the confidence and self concept we need to achieve success.

Craig Harper is an “Australian motivational speaker, qualified exercise scientist, author, columnist, radio presenter, and owner of one of the largest personal training centres in the world” according to a bio.

He wrote a couple of articles related to all this. In Personal Development Fraud (part two) he writes about the myth that “You deserve it!” — “No you don’t!,” he writes. “You earn it. You create it. Whether or not we achieve our goals or turn our dreams into reality has got nothing to do with what we deserve and everything to do with what we create.

“The problem with the ‘you deserve it’ philosophy is that we think success and happiness will somehow fall in our lap because the ‘universe’ owes us (more cosmic crap) and when it doesn’t, we’re disillusioned and feel sorry for ourselves. And while we’re doing that, the smart ones are out there getting stuff done and reaping the rewards.”

In his post Oprah Winfrey – ‘The secret’ another personal development writer Steven Aitchison says, “My only problem with the ‘Law of attraction’ and the the teachers who are teaching it is the way it is taught. It has now become almost religious and that can have negative connotations and a lot of stigma attached to it.”

For more on the realities of personal development and how to “do it”, take a look at articles and programs on my site Personal Growth Information.